When I encourage my patients—and you—to lose weight, it’s always my goal to do it in as positive and encouraging a manner as I possibly can.

Yes, I am extremely adamant about the fact that excess weight is not something you need, and I’m darn near forceful about the fact that, if you’re carrying around extra pounds, you have to shed them. But my goal is to motivate you—not to make you feel like you’ve committed a crime.

After all, it’s no surprise so many people are overweight, given the fact that we’ve all been bombarded for years with bogus “low-fat” diet advice from our nation’s “experts.” As a result, most people opt for the supposedly healthy processed “whole-grain” and “reduced-fat” foods that line grocery store shelves. It’s often in an earnest effort to stay thin that people remain just the opposite: overweight and sick.

And I totally understand that it’s tough to resist the temptations out there… especially with virtually every third TV ad is doing an amazingly effective, marketing-genius-led job of feeding your food addiction.

Indeed, the cards are stacked against you when it comes to weight loss. So when I talk about the importance of losing weight, it’s because I know that weight is dangerous and deadly—and I don’t want you to suffer the consequences. I’m not saying that you, yourself, are a bad person and should be stigmatized.

I bring this up because I just read a study that concludes that ads that negatively portray, or stigmatize, obese people range from plain old ineffective, to actually making the situation worse.

In the study, the researchers, from the University of California, noted: “For individuals who perceive themselves to be overweight, media messages that stigmatize obesity…can have the paradoxical effects of increasing their consumption of calorie-rich food and reducing their feelings of self-efficacy for being able to control their diet.” 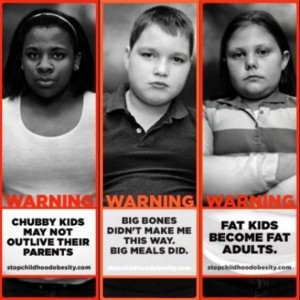 I absolutely agree with the fact that ads like this one in Georgia don’t do much to help people. Showing unhappy kids in this way may work on a small cross-section of people. But overall, it’s exploitative, and doesn’t impart useful information on how to lose the weight. It’s simply a lazy ad.

Here’s where the point gets a little too far off-kilter for me, though. Jeffrey Hunger, the study’s lead researcher, said “These sorts of representations not only perpetuate inaccurate stereotypes—bodyweight is a very poor proxy for actual health—but may also marginalize a segment of the consumer population.”

Weight is a very GOOD proxy for actual health, as far as I’m concerned. I’m all for not marginalizing people, and I’m against pure plays on emotion. But to tell people not to worry about being overweight, or simply to ignore it, isn’t helping anyone.

There’s a fine line between hurting people’s feelings, and rationally jolting them into action. And you are never going to hear from me that being overweight is OK. Yes, you can be overweight and “healthy” NOW. But those excess pounds are a visible indicator of future risk. And I need you to know that … even if it hurts your feelings.

It’s not my intention to be negative, but at the same time, sometimes I need to tell you things that might make you feel uncomfortable, and that may sound “negative.” Because I want you to live longer and healthier than you ever thought you could.

Which is a very positive thing.