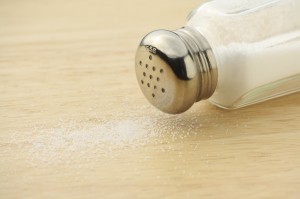 I love my city but, boy, can the powers-that-be in the Big Apple be clueless sometimes. Our mayor’s latest proposal to the NYC Board of Health is aimed at reducing…salt.

The proposed plan would require chain restaurants to label high-sodium dishes as a warning to diners that they’re getting more than their “recommended” limit of sodium in just one meal. The labels would look like mini saltshakers, and appear on the menu next to the unhealthy dish. So cute, right? What about putting a picture of an overweight person, with their gut hanging out, next to the desserts?

The rules, which would go into effect in December if the Board of Health is silly enough to approve them, would only apply to chain restaurants, which the city defines as ones with 15 or more locations nationally. Any dish with more than 2,300 mg of sodium — which is the federal recommended daily limit —would require the label, officials said.

Here’s the problem: This is an erroneous, seemingly arbitrary, and far too low RDA. All across Europe, the sodium recommendation level is higher and disease rates lower.

Anyway, the sodium-warning label is part of this administration’s comprehensive strategy to lower the city’s premature mortality rate by 25 percent by 2040. Good cause, wrong application.

The restaurant industry complained that the changes will unfairly burden their businesses,and are unnecessary. Well, for once, I agree with big business. And I most certainly do NOT agree with the mayor.

I think that we need to establish once and for all what is healthy and what isn’t and then make changes. REAL changes. All of these silly little changes amount to nothing but a distraction, and, as such, people stop noticing them. That’s my big issue: People who come to these fast-food restaurants need to be educated about what’s healthy and what’s not–and the money spent on this labeling could be better spent on that education.

Education, in addition to a good dose of shame (i.e., putting “Smoking Kills” on cigarette cartons) changed our attitude towards smoking. The same must occur for an equally, if not more insidious killer: sugar. And, by the way, I would bet that if the food served in fast food establishments were organic, free of pesticides, etc., they wouldn’t need all that salt to provide flavor.

I will say this: You can bet that nearly all the dishes the “salt shaker” icons will be next to are unhealthy dishes. But not because of the salt; they’re probably loaded with carbs and sugar, which are the real enemies. Or they’re processed, packaged, and filled with chemical preservatives. Where are the cute little icons for those things?

From a scientific perspective, there’s virtually no reason for salt to be called out here. I’ve long noted that salt is often considered to be the enemy, when, in reality, sugar is the real enemy. I’ve written in the past about how sugar is a way bigger contributor to hypertension risk than salt. And there’s no evidence that lowering salt actually prevents heart disease. Not only that, but also banishing or severely limiting salt could actually be harmful to your health.

So don’t worry your head over those cute little menu icons, should they appear at some point. But do stay focused on high-protein, low-carb dishes, and you won’t go wrong. And, if you can stand it, skip the fast-food joints entirely. They’re making us both fat and poor .