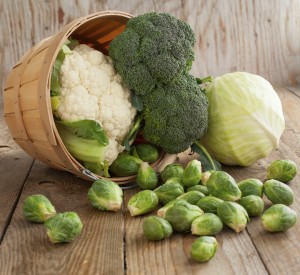 These days, the word “detox” is on the tip of everyone’s tongue. (With reports like the one I shared on Monday, it’s no wonder.) And that’s why I’ve devoted a significant amount of time to dispelling some popular myths surrounding the subject.

Like the idea that an effective detox regimen has to be complicated. (Honestly, it doesn’t.)

There are a number of supplements that can help your body clear out toxins. But as I’ve explained before, even a simple water fast will do the trick in a pinch.  And on a day-to-day basis, the food you eat puts just as big of a dent in your toxic burden as the food you don’t eat.

In fact, a recent study shows that you can disarm some of the dangers of air pollution just by filling up on broccoli sprouts.

To come to this conclusion, researchers prepared a special broccoli sprout beverage, standardized for the active phytochemicals glucoraphanin and sulforaphane. Sulforaphane might sound familiar. I’ve mentioned it before because it’s a powerful anti-cancer agent. And glucoraphanin is the precursor to sulforaphane.

So the fact that just half a cup of this concoction boosted subjects’ ability to detox deadly airborne carcinogens like benzene shouldn’t come as a surprise.

In fact, blood and urine samples showed that benzene excretion shot up by 61 percent on the very first day the study participants drank the broccoli sprout beverage. And the effect lasted for the whole 12-week trial.

We’ve been relatively successful at reducing air pollution, on the whole. (In fact, the air in New York City where I live is cleaner now than it was when I was a child.) But unfortunately it’s still a terribly hazardous part of most Americans’ lives. It’s responsible for killing millions of people every year.

So continuing to clean up the environment is obviously the most necessary step to take. But if you’re going to avoid toxic fallout, you also need to find some ways to mop up and clear out the unavoidable leftovers from your body. And a simple solution like this broccoli sprout beverage is a great option.

I’m going to go out on a limb here, though, and take a guess that the idea of a broccoli smoothie doesn’t sound all that appealing to you. (I can just imagine the looks on my patients’ faces if I told them to toss some broccoli sprouts into the blender and drink up.)

But that doesn’t mean you can’t achieve a similar effect by filling up on plain old cruciferous vegetables—like Brussels sprouts, cabbage, kale, cauliflower, and of course, broccoli. You just need to make sure you’re preparing them right.

I explained the right way to prep cruciferous veggies last year.  But now is a great time to revisit a few key points.

Like I said earlier, the compounds glucoraphanin and sulforaphane are responsible for most of cruciferous vegetables’ anti-cancer powers. There’s a catch, though.

You also need plenty of an enzyme called myrosinase in order to activate these disease-fighting benefits. Broccoli that’s organic, fresh, and raw contains the most myrosinase. But broccoli that’s been pre-packaged and overcooked may not contain any.

So once again, I recommend getting your produce—cruciferous vegetables included—at the local Farmer’s Market. (Or better yet, grow them in your own garden.) And be sure to chop them up about five minutes before you plan to eat them. (This activates myrosinase, which boosts sulforaphane content.)

And if you’re going to cook your veggies, don’t go overboard. A light steam on the stovetop (never the microwave) for five minutes or so—just enough to make your broccoli or cauliflower slightly tender—is best.