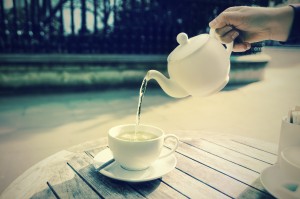 When it comes to tea, going green is all the rage—for good reason. I’ve been touting the benefits of green tea for years. But black tea has just stolen a little bit of the spotlight.

According to a new study, it appears that theaflavins—a type of antioxidant polyphenol found in black tea—may boost microvascular function, or microcirculation, in healthy adults.

I’ve talked about the importance of microcirculation before. This system is made up of the tiny capillaries and blood vessels that carry vital nutrients and oxygen to all your cells. But due to their delicate size and nature, these critical pathways also happen to be particularly susceptible to damage. So I always stress the importance of protecting and strengthening them. And it looks like black tea theaflavins may help do just that.

Of course, most of the studies on tea have focused on green tea and its constituents, especially  antioxidant catechins like EGCG. But there hasn’t been as much research on theaflavins, which are unique to black tea, so this new study is particularly interesting.

Researchers recruited 24 healthy adults, with an average age of 63, for a double-blind, placebo-controlled, randomized, crossover study. Participants underwent six separate tests. Each time, they received either a single 500 mg dose of green tea catechins, a placebo, or one of four varying doses of black tea theaflavins (100 mg to 500 mg). Microcirculation was measured initially, and then at two, four, and six hours.

Results showed that both the catechins and the 300 and 500 mg doses of theaflavins improved microcirculation compared to placebo.

In other words, both green tea AND black tea can help improve microcirculation.

And anything that boosts microcirculation and helps to improve blood flow is going to relieve oxidative stress. Which, in turn, significantly decreases inflammation. And, as you know, curbing inflammation is the key to fighting any number of chronic health problems—from heart disease to cancer to Alzheimer’s.