McDonald’s cheery slogan is “I’m lovin’ it.” But anyone who eats there regularly had better  also love diabetes and heart disease…because the entire menu is a one-way ticket to both chronic conditions.

Let’s skip the rest of the menu (for now) and look at the staple that comes with every meal McDonald’s serves: the French fry. It would be normal to assume that there are three ingredients in McDonald’s French fries:  potatoes, oil, and salt. But I’ve reminded you before of the old saying about what happens when you assume things…especially when it comes to McDonald’s.

It turns out that there are — wait for it — 17 ingredients in their French fries. And not good ones. Here’s the breakdown:

– Potatoes: not big on my list to start with, but especially bad when you see how they source their potatoes. 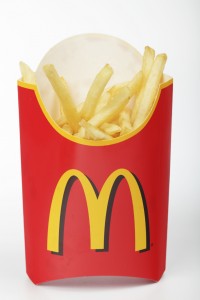 – Hydrogenated soybean oil: Again, GMO! Plus the hydrogenation process makes the oil even more unhealthy than it would be in its natural form.

– Safflower oil: The root cause of most diseases is inflammation. One of the quickest ways to become inflamed  is by eating too many omega-6 fatty acids and not enough omega-3’s. Safflower oil contains an extremely high level of the former and absolutely none of the latter.

– ”Natural flavor”: The “natural flavor” moniker means nothing since it can be derived from a wide array of disturbing ingredients, including things like beetle dung and the nerve- and brain-toxin monosodium glutamate (MSG). For the record, McDonald’s claims its “natural flavor” comes from a vegetable source. But in my opinion, if “natural flavor” has to be listed as an ingredient, the food is anything but natural.

– Dextrose: Just another word for sugar. And can anyone explain to me why there is sugar in a French fry?

– Sodium acid pyrophosphate: This ingredient is apparently used to maintain the color of the fries. But on the chemical industry’s own safety data sheets, it’s listed as hazardous for ingestion. It causes inflammation, and over-consumption leads to elevated blood phosphorus levels, which may contribute to osteoporosis.

– Citric acid: Most people see this on a label and assume it’s referring to lemon juice or some other citrus extract. But the truth is, a lot of citric acid, instead of coming from fruit, comes from common household black mold, which is often used to (very cheaply) convert sugar into citric acid (in the lab, black mold + glucose or sucrose = citric acid. Do you want to be eating that? Do I even need to be asking you that?)

– TBHQ: This petroleum-based preservative has been linked to asthma, skin conditions, hormone disruption, and, in long-term animal studies, to cancer and damage to DNA. This additive can be found in 18 McDonald’s menu items. It’s potentially lethal, but don’t worry, the FDA says it’s generally regarded as safe (GRAS). Stevia, as you may recall, took years before it was granted GRAS status—and thanks to government heel-dragging and general bad mouthing of all things natural, people are STILL skeptical of it. Yet, this toxic petroleum-based product is considered an A-OK ingredient in food that millions of people—including kids—are consuming on a regular basis.

This list should speak for itself, but I need to stress once again how serious a concern this is. Especially for kids, who routinely fill up (or rather, whose parents and grandparents routinely LET THEM fill up) on this poison.

So how do you break the cycle? I’ve spoken before about ways to play “potato politics” and get your kids (and the rest of the family, while you’re at it), off French fries.

In fact, these tips can come in handy for the whole family.