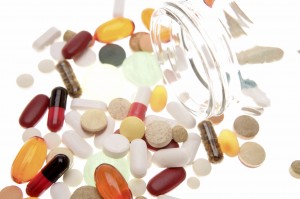 A firestorm erupted here in New York earlier this week. And supplements were at the center of it. I’ll be the first to admit, it looks bad for the supplement industry. Very bad indeed. But, as usual, there’s more to the story than the incriminating headlines. I’ll get to that in just a minute. First though, let me fill you in on the controversy.

And we’re not talking about little mom-and-pop shops here. These are some of the biggest, most trusted retail chains in the country. Ones you probably shop at yourself—at least occasionally.

Target, Walmart, Walgreen’s, and GNC are all in the hot seat. And for good reason.

The authorities claim the products in question are “fraudulent and potentially dangerous.” After five different types of herbal supplements were submitted for testing, results revealed some admittedly disturbing findings.

Apparently, four out of five of the products didn’t contain any of the active herbal ingredients listed on the label. Instead, most contained fillers and other ingredients that WEREN’T listed (including some that can be potentially dangerous allergens for some people).

It’s also important to note there are some industry experts who are questioning the validity of the testing the products were subjected to.

According to one Harvard Medical School professor and expert on supplement safety, the results revealed by the testing were so extreme they’re hard to accept at face value. He suggests that perhaps the manufacturing processes destroyed the DNA of the active ingredients to the point where they became unrecognizable via testing.

And according to the American Botanical Council, there are some serious limitations to relying solely on DNA testing to determine the efficacy of a supplement. In particular, the kind of DNA testing the New York State attorney general’s office used isn’t really equipped to identify herbal extracts, which often don’t contain the DNA of the whole herb—but still offer therapeutic benefits.

So, clearly, more testing should be done according to proper standards. Hopefully, after more thorough investigation, the situation won’t be as bad as the headlines are currently making it out to be.

And, even more importantly, I hope these companies will work quickly to get any potentially dangerous ingredients that aren’t listed on the labels OUT of their products.

I know some of these chains—Target and Walmart in particular—pride themselves on lower prices, and claim they’re helping consumers get a better value for their hard-earned money. But if they’re not vigilantly monitoring the quality of those products…well, what kind of value are you really getting?

The fact is, when you pick up a random supplement from a store shelf, you DON’T always know what you’re getting.

But that doesn’t mean the entire supplement industry is a sham. Quite the contrary.

There are so many reputable companies producing truly excellent products—and selling them in retail stores. That’s what makes headlines like these so maddening. A few disingenuous manufacturers cast doubt on what is, for the most part, really a well-intentioned, responsible industry—with YOUR best interests at heart. (Which is more than you can say about Big Pharma…but that’s a topic for another day.)

All that said, these questionable practices are precisely the reason I developed my own line of nutritional supplements—and why I’m exceptionally careful about the other products I endorse.

I’ve been working with supplement manufacturers for years on an advisory basis, so I know exactly what to look for when it comes to quality control practices. And I make sure any product I recommend has been held to the highest standards—from initial formulation with the best quality ingredients all the way through the manufacturing process.

In fact, I’ve made certain that the manufacturer of my NuLogic Nutritionals supplement line verifies the identity and purity of each ingredient before a product is made. Then samples from each finished batch are sent out to a third party lab for testing and verification.

In other words, we don’t rest until we’re absolutely certain that what you see on the label is what you’re truly getting—in each and every dose.

It’s an exhaustive and thorough process. Which is why, occasionally, some of my products go on backorder. And why some of them are indeed more expensive than what you’ll find in places like Target, Walmart, etc.

Don’t get me wrong. I love a good bargain as much as the next guy. But when it comes to your health, that’s not a trade-off you should be willing to make. The nutritional supplements you take should be an investment in your healthy future. And the fact is, sometimes you get what you pay for.