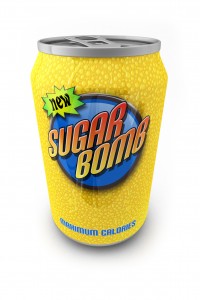 I may be a proud New Yorker. But I love California.

Sure, it’s the land of hippies and outrageous politics. But I adore the warm weather and palm trees. And its residents are some of the most creative, smart, and entrepreneurial people in the country.

So it’s no surprise that they’re usually ahead of the curve when it comes to monumental changes. As California goes, so goes the Nation, right? I can only hope that turns out to be true where this latest controversial development is concerned.

You see, California is considering a new law that would require soda cans to have warning labels. These labels would plainly state that sugar is a major cause of obesity, diabetes, and tooth decay.

Obviously, I am ECSTATIC about this. It would fall right in line with the millions of other warning labels that pop up everywhere on the left coast. (And if you live in or have ever visited California, you know what I mean.)

In other words, a move like this is right up California’s alley. And it’s one of the many reasons I love the place so much.

I also love this quote, from Bill Monning, the senator who introduced the bill:

“When the science is this conclusive, the state of California has a responsibility to take steps to protect consumers. As with tobacco and alcohol warnings, this legislation will give Californians essential information they need to make healthier choices.”

Well it’s about time somebody stood up and said something, don’t you think? (Someone other than me, that is.) Because the science on sugar most certainly is conclusive. And what you’ve read here in the Reality Health Check and in my Logical Health Alternatives newsletter is only a tiny slice of it. There is a vast amount of research out there that proves, unequivocally, that sugar is a driving force behind practically every chronic disease plaguing our planet today.

Here are just a few facts from the California Center for Public Health Advocacy:

Yet Americans consume this poison without a second thought.

We’re talking about diseases that cost taxpayers billions of dollars every year. With all of the attention that has been lavished upon health care reform and insurance enrollment recently, you’d think someone in Washington would make more than just a token effort at actually preventing these diseases.

If you ask me, the next steps are crystal clear. The United States has drastically reduced the number of smokers in this country simply by making the public aware of the fact that cigarettes can kill you. Banning smoking in public places seemed unthinkable before California did it back in the mid-90s. And yet today, you’d be hard pressed to find an ashtray in a bar most anywhere in this country.

And no one bats an eye over it. That’s just how it is now.

Yet we simply can’t seem to wrap our heads around sugar being a health threat on par with tobacco. Even when it so very clearly is.

That’s why I like this approach so much. No one will be up in arms over legislation to ban the stuff (which I something I totally support, by the way). It’s just a simple warning label—the same kind you’ll find on cigarettes and other harmful substances.

Maybe it’s not everything I want. But it’s a great first step. And at this point, any movement away from sugar’s reign of terror is a victory to me.