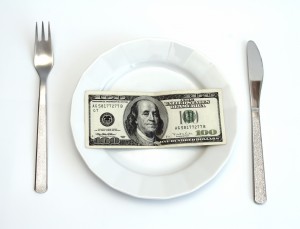 I have been lamenting the high cost of healthy eating for many years, and I’ve lectured extensively on this topic. Unfortunately our fast-food culture has become nothing short of a Dollar Menu Disaster. And few have been willing to talk about it as a serious cause of the obesity epidemic.

But the science to support the connection is real—and growing. And it’s not just in the U.S. A new report out of the U.K. highlights the problem with some staggering new statistics.

And since the U.S. is worse in almost all aspects of health (at least in the most developed nations), you’d better believe these numbers more than hold up for us here at home.

According to the report, the number of obese and overweight people in the U.K. increased from 39 percent in 1980 to 64 percent in 2008. And healthcare costs of those suffering from weight-related issues cost the National Health Service about $8 billion in U.S. dollars in 2006/07…more than alcohol or smoking (which are both heavily regulated vices).

The report also compared retail food prices dating back as far as 30 years and found similar trends in the U.K., U.S., Brazil, China, Mexico and Korea. And, not surprisingly, the healthy stuff is going up, while the unhealthy food is getting cheaper by the minute. I wrote about this last November (see “The widening divide in healthy vs. unhealthy food prices”), and unfortunately things aren’t likely to get any better anytime soon.

On a global scale, the cost of some processed foods has dropped by up to 20 percent. Compare that to a 91 percent rise in vegetable prices in Brazil, China, Korea and Mexico.

And here’s another alarming side-by-side stat: The price of vegetables has risen by a whopping 199 percent in the past 30 years while the cost of ice cream has fallen by 50 percent.

Across the world an increasing share of the population is overweight and obese, with the rate of increase particularly pronounced in developing countries. Because, quite simply, it’s easier to eat cheaply. And that’s because unhealthy foods are subsidized and there is a cheap distribution system for them.

Even now, there is no inexpensive distribution system for any vegetables, let alone organic ones. We are a nation that prides itself on cheap food. Right after World War II, we spent almost 40 percent of our income on food–now it’s less than 10 percent. And we have never been fatter or unhealthier.

Next: instead of looking just at the bottom-line cost of food, look at the “cost-to-satiety ratio.” Satiety refers to feeling full, and as I’ve told you before, high-protein, low-carb food fills you up way faster than high-carb, low-protein fare.

A loaf of cheap white bread won’t fill you up at all, for instance, but cashew butter and avocado–which aren’t as cheap–fill you up faster. Similarly, a cheese omelet will fill you up a lot more than a bagel. You don’t have to eat as much of the good stuff, in order to feel full. Good food is more expensive, but it’ll last longer. And that should even out the impact on your wallet.

If you’re still spending a little more on good food, even after that, remember this: You’re likely saving on future doctor bills.

“The rising cost of a healthy diet” http://www.odi.org/rising-cost-healthy-diet