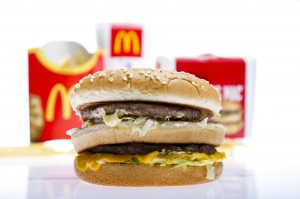 Last week, I broke down the ingredients in McDonald’s French fries in excruciatingly depressing detail. But I’m not done with this monstrous mega chain yet. Today I want to talk about its so-called “transparency” campaign. Let me take a step back. A few months ago, McDonald’s announced it’s making a greater effort at transparency and engagement with its new campaign, “Our Food, Your Questions.” How heartwarming, right? Actually, the company did it out of necessity: It has a serious image problem and a saggy bottom line (which matches the saggy bottom it’s giving America), and it wants to shed its reputation for serving mass-produced, unhealthy food and taking advantage of people who have a limited budget. Anyway, McDonald’s, which serves 28 million people daily (roughly 10 percent of the population) in the U.S., is now promising straightforward answers to the quality and origins of its foods — something it has always been reluctant to do. So they’re pulling all sorts of flashy things out of their hat. Things like behind-the-scenes web vignettes and infographics, which will apparently illustrate the production process behind its products like Chicken McNuggets and the McRib. Supposedly, they’ll show how they go from “farm to restaurant.” (What kind of farm and what kind of restaurant remains to be determined.) This sickens me because it demeans the term “farm to table.” As the world’s largest buyer of beef and pork—churning out hamburgers that cost a dollar—McDonald’s current practices should be considered factory-to-drive through, at best. The company’s supply chain is so long, and it sources raw ingredients from such a wide array of locations and facilities, it would be impossible for any one tour, vignette, or infographic to show more than a sliver of what really goes on during the production process. But the fact is, McDonald’s pork is still raised almost exclusively in gestation crates so it can’t even move. And many of its eggs (at least in the U.S.) still come from birds locked inside cages so small they can’t spread their wings. And let’s talk about that beef. Here are a few gems from McDonalds’ website that will give you an idea of the quality and safety of their burgers.

And while McDonald’s says it no longer uses so-called “pink slime” in its burgers, it does use an anti-foaming agent, dimethylpolysiloxane, in the oil it uses for its fried menu items.  It also uses azodicarbonamide, aka, “the yoga mat chemical,” in its buns. They justify it by saying azodicarbonamide has many uses: “Think of salt: the salt you use in your food at home is a variation of the salt you may use to de-ice your sidewalk.” Are they serious? They’re basically shoving their “food” in our faces and telling us to deal with it, that this is all normal. Move along, nothing to see here. The reason I pick on McDonald’s so often is that they have the power to exert tremendous change in the food supply. As the biggest fast food company in the world, McDonald’s choices are no small potatoes. Any change for the better could mean a much happier meal for all of us. But in the meantime, the good news is, most people are already well aware that McDonald’s isn’t a healthy place to eat. And I predict their attempt to win over all the doubting Thomases out there with this half-hearted “transparency” will actually have the opposite effect. At least, that is my earnest hope. Source: “What McDonald’s new ‘transparency’ campaign is hiding,” Time, 10/13/14