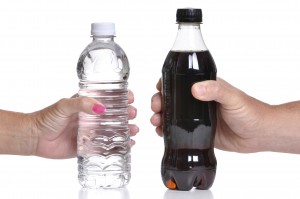 If you’re over 40, you probably remember Tab. Introduced in the 1960s and particularly popular in the ‘70s and early ‘80s, it was the diet cola of choice for many. It was one of the first on the market, the one I remember my sisters drinking, and the one I drank when I went on my 40-day fast for Lent to lose weight. Of course, that was long before I learned that weight loss doesn’t have to be that extreme…or that unpleasant. So I hadn’t thought about Tab in years—until just the other day when a patient told me a story he’d heard about it.

Apparently, he noted, when the Coca-Cola Company was first bringing Tab to market, they recruited focus groups to sample a few different beverages in order to determine which one they would ultimately sell. The members of the group were supposedly asked to choose between “TAB 1” “TAB 2” and “TAB 3.” When the members of the group asked what “TAB” stood for, the CocaCola Research & Development team reportedly replied, “Totally Artificial Beverage.”

That story may or may not be true. Other accounts say an old-school IBM computer spit out a random selection of words, with “Tab” ultimately selected as the winner. But regardless of how it actually got its name, Tab was (and is) still a totally artificial beverage. And, as we know now, totally unhealthy.

You can still find Tab today in the U.S. and some other parts of the world, but it’s not as popular as it once was. Unfortunately, that doesn’t mean people have caught on to how dangerous diet sodas are. In fact, Diet Coke, Diet Pepsi (and the like) are bigger than Tab ever was. And that’s scary.

I’ve written many times before about how diet sodas are NOT “healthy alternatives” to regular sodas. Anything but. In fact, they’re worse, and have been linked to a number of chronic diseases, from diabetes to heart disease.

So the bottom line here, as ever: Stick with water. If you like bubbles, by all means, go for seltzer. Want flavor? Squeeze in lemon or lime, and add some fresh berries or mint. It’s much better for you than soda. Not to mention much more refreshing.