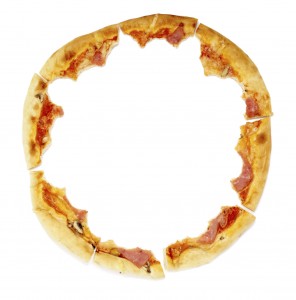 As an Italian, I know I shouldn’t be saying this. But I’m going to say it anyway because I care too much about your health…

A new study shows that pizza may in fact be just as bad for obesity as sugary soft drinks.

Ok, ok. While that may be no surprise to either of us…I just couldn’t help but take the opportunity to be the angel on your shoulder as we head into the weekend.

I know temptations abound. It’s just so easy to pick up the phone and order take-out, especially when it’s just “too hot to cook.” So forgive me for sounding preachy here, but sometimes when a study like this crosses my desk, I can’t help but share it with you in hopes that it will be the one thing that will help you “do the right thing” when temptation arises.

Analyzing a cross-section of nutrition data on a national sample of kids ages 2 to 19 between 2003 and 2010, researchers found that on days they eat pizza, kids (younger than teenage) ate on average 83 more calories, and teens ate 230 more calories on average, than non-pizza days. Both kids and teens, on these days, ate 3 to 5 more grams of saturated fat and 100 to 400 more milligrams of sodium.

Of course, as I’ve noted before, saturated fat isn’t the enemy in and of itself. Not if you’re talking about an avocado, or cashew butter spread on some apple slices. But it’s certainly the enemy in pizza’s case, as pizza is essentially nothing but an enormous wedge of bread (which is carb-filled, which translates to sugar), slathered in sauce that’s often also very sugary. The cheese is about the only thing it remotely has going for it.

So as I’m sure we all could have guessed without the study…pizza is bad, and soda is bad.

But something else that’s bad is this statement, in the conclusion of this study’s abstract: “The adverse dietary effects of pizza consumption found in this study suggest that its consumption should be curbed and its nutrient content improved.”

It’s that very last part that scares me. That’s all we need: more overly processed, “fortified,” whole-grain junk, which is just as bad as white bread. Instead of making up for all the stuff that’s removed when food is processed, why not enjoy food that’s healthy to start with? How’s that for revolutionary?

And as for temptation and making the “right choices” this weekend…don’t forget just how enjoyable it can be to eat “right”…instead of pizza, how about a juicy burger with gouda, sautéed onions, fresh tomato and avocado instead? Along with a side of baked sweet potato with butter, cheddar, and bacon!