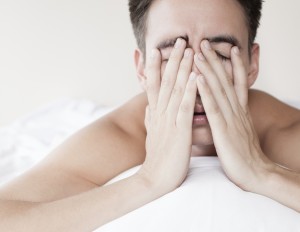 This isn’t the first time I’ve talked about the importance of getting good sleep, but I’m bringing it up again because I’ve read an alarming new study.

The study’s researchers concluded that heavy snorers–and people with sleep apnea–may be more likely to develop memory and thinking problems earlier in life than well-rested people.

Researchers in the study reviewed the medical records of almost 2,500 folks between 55 and 90 years old. The researchers classified them one of three ways, from most to least severe: Alzheimer’s disease, early stages of mild mental impairment, and free of memory and thinking problems.

What those researchers found: people with sleep disruptions were diagnosed with mild mental impairment about 10 years or more sooner than those who didn’t have sleep issues (namely around age 77, vs. 90 for those who had sleep breathing problems).

Of course, only an association was established, rather than a definitive cause; it hasn’t been proven that sleep apnea or snoring CAUSES mental decline. But there is a very clear takeaway here: Use of a CPAP for those with sleep apnea may delay the onset of mental decline.

Sleep apnea and heavy snoring are largely undiagnosed in seniors, but they’re common, affecting about 53 percent of men and 26 percent of women.

It’s time docs took these disorders seriously, and came up with an easier and more intuitive way to test for them. Until then, your job is to talk to your doctor about your sleep patterns, and if you have a sleep partner, have them observe you. Then bring that info to your doc.

Beyond that, I’ve given plenty of tips on simple ways to sleep better, which I do recommend along with a CPAP. First up is to get down to a normal weight  — obesity harms your sleep. Then review my past Reality Health Check on eight sneaky substances that may be stealing your sleep. And here’s one on yet another sleep enemy, as well as five natural substances that’ll help you get your Zs.