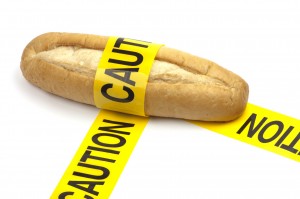 Every so often, I come across a story so ridiculous I have to double check my calendar to make sure it’s not April Fool’s Day.

And this was definitely one of those stories.

Let me just share the first line, and you’ll see what I mean:

“White bread made from refined grains may promote increased Lactobacillus levels in the gut, researchers say.”

Let me know when you’ve recovered from your hysterics. It made me laugh, that’s for sure. Though I’m sad to say it was no joke. That would at least mean that these researchers had a sense of humor. And I’m afraid sense of any kind is in dangerously short supply wherever these clowns came from.

I mean, who in their right considers white bread as even remotely healthy anymore— much less devotes an entire clinical trial to it?

I’ll tell you who does this—food chemists, that’s who. Instead of trying to sort out how they can solve the growing health disaster caused by the world’s over-processed eating habits, they went fishing for reasons to justify it.

So white bread is supposedly a “probiotic” now. Well guess what? Nicotine lowers your risk of Parkinson’s disease. But I don’t see any headlines hailing the health benefits of cigarettes, do you?

But that sheer nonsense is just the tip of the iceberg…

First of all, this was hardly top-shelf research. It was a tiny pilot trial—just 37 people filling out diet questionnaires and submitting fecal samples.

Plus, this article doesn’t even mention which type of Lactobacillus the white bread magically improved. (There are many strains of this particular bacteria.) And the icing on the cake (or perhaps I should say, the margarine on the Wonderbread)?

The researchers themselves even stated that this increase could have come from food that subjects were eating with the bread.

So basically, these scientists made no REAL findings at all.

And yet, somebody decided this study was worth publishing. Effectively giving the food industry one more outlandish health claim. Which it can use to sell even more processed garbage to the American public.

But even if this bacterial boost did come from the white bread, so what?

Sure, Lactobacillus is beneficial. But it won’t do much to improve your health all on its own. There are millions of species living inside us, and they all work in tandem to produce good health. Without a diverse population of bacteria in gut, you won’t reap any of the benefits of probiotics.

So eating something that only increases one species of bacteria just doesn’t make sense. Especially when that food is white bread.

I mean, we’ve known for how long now that white bread is a one-way ticket to diabetes?

You know better than that by now. Why don’t these clueless food chemists?