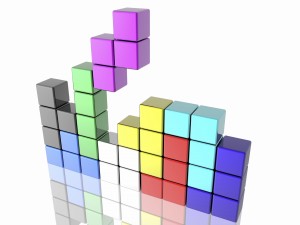 There’s been plenty of research in recent years showing that playing certain games and doing puzzles helps keep you mentally sharp. But a new study shows one particular puzzle game may also help keep you slim. It seems that playing the game Tetris® for just 3 minutes at a time can significantly curb cravings.

In case you’ve never heard of Tetris, it’s a computer game that became popular in the early ’80s. The object of the game is to strategically rotate, move, and drop a procession of puzzle pieces seamlessly into a rectangular matrix at increasing speeds until you reach the top of the board.

As you can imagine, playing Tetris requires mental focus and imagery, much like craving food does. And because your mind can only focus on one thing at a time, the game takes precedence.

Researchers tested this theory on a group of 31 college students in Australia. And they found those who played the game whenever a major craving struck decreased the strength of their craving by as much as 70%. And these benefits held steady over the entire seven days during the experiment, no matter how many times they played.

Researchers dubbed it the “Tetris Effect.”

You can download Tetris as a free app for your smartphone, which makes it a convenient–and fun–way to keep your hands out of the cookie jar.