Last week, I told you a story about a patient of mine who had recently been in a swanky New York hospital with substandard care. You may remember that I also mentioned he was one of two of my patients who happened to be in the hospital at the same time (a very rare occurrence).

So today, I’d like to tell you about Patient B—I’ll call him Steve.

Steve isn’t as well-to-do as Phil (the other patient I told you about). He comes from a much more modest family, and he ended up in a hospital on Long Island at the insistence of his cardiologist. He didn’t have bodyguards or a VIP room with stunning vistas of the East River. Nor could he enlist the services of a concierge at the snap of his well-manicured finger.

Steve suffers from a congenital heart defect, so doctors often get confused and wishy-washy—equally afraid of action and inaction—when it comes to his care.

I had been working with Steve to get his heart rate under control for about two weeks while his cardiologist was out of town—with limited success, I admit.  I was able to normalize his heart rate somewhat, but it was still in the 120s. High, yes, but not alarming.

When he checked in with the Physician’s Assistant (PA) at his cardiologist’s office, the PA was shocked, of course. After all, we live in a world of reactionary American medicine—where no one is allowed to think but, rather, follow the rules of evidence-based medicine. Which dictated that Steve should to go to the hospital immediately.

Not surprisingly, Steve was frightened by this PA, who told him to go to the hospital. So he went. On the Thursday before Labor Day weekend. And guess what? There he sat taking the same medications I was already giving him. And not a single medical practitioner saw him until Tuesday. Tuesday.

Who is paying for this? And why did something like this occur in the first place?

The answer to that first question is, of course, all of us. We’re all paying for it, with the rising health care premiums and taxes for Medicare and Medicaid that we all shell out.

The answer to the second question? Well, I can only assume it goes back to the fear—and resulting “inaction”—I mentioned above. If no doctors saw Steve, no doctors could get sued, right?

Steve wound up being in the hospital for over two weeks. At that point, the PA finally agreed to add more medications than is “standard protocol” (which, I might add, is what I urged them to do the first day he was admitted). And, wouldn’t you know it—thinking outside the box—and looking at Steve as an individual instead of a checklist of symptoms did the trick.

Just two more quick points about Steve’s experience in the hospital. Take just a moment to look at this picture I snapped of his dietician.  Steve wisely refused to follow this “expert’s” advice.

The dietician at the hospital: Not exactly a snapshot of health and vitality. 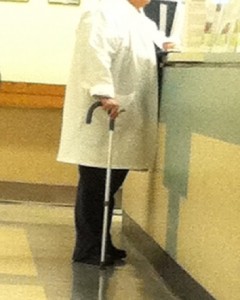 While I’m at it, take a look at this photo as well—of the menu Steve received below… 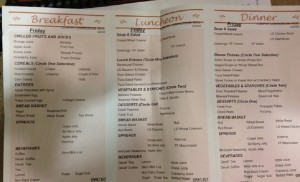 It just about speaks for itself…

For breakfast, chilled fruits and juices, cereals, pancakes. For lunch, macaroni and cheese was an option; and “vegetables and starches” were more of the latter and virtually none of the former… Lunch also included a bread basket and dessert. (Who needs dessert at lunch?) As for dinner…Well, it was the best of all terrible options. Though that isn’t saying much.

It staunchly adhered to the outmoded, ineffective low-fat, low-sodium “DASH” diet. Aren’t these people aware that eating this way has actually been proven detrimental to health in clinical studies? Or perhaps they simply don’t care.

My advice? After seeing two different ends of the spectrum, I can honestly say your best bet is still to stay out of hospitals—even the “fancy” ones—as much as you can. And if you must go to one…order in. And not from a burger chain.