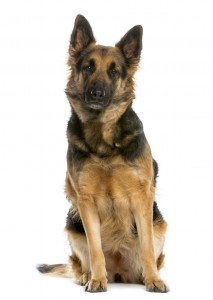 When I walk my beagle Remington, he just sniffs and sniffs the entire time. If you have a dog, I’m sure you can relate. And I don’t know about you, but I’ve always wondered what exactly it is he’s sniffing.

So I was pretty amazed when I came across some new research that offers a little insight into that very question. Because apparently, Remington can tell a lot about what’s going on through his adorable nose.

Get this: A team of Italian scientists recently found that specially trained dogs can use their noses to detect prostate cancer by sniffing urine samples—and with nearly 100 percent accuracy, too.

It might sound crazy, but it’s true. Researchers tested the ability of two German Shepherds—Liu and Zoey—to identify prostate cancer in urine samples collected from hospitals in Milan. The samples came from 362 men with prostate cancer, as well as 540 men with other forms of prostate disease.

Researchers set up a small room with a video recorder on one wall, along with a series of bowls containing the urine samples. Handlers walked each dog around the full circle of samples once. And then a second time—during which the dogs would stop at the bowls containing urine with odors specific to prostate cancer.

Incredibly, Liu’s accuracy rate was 99 percent—Zoey’s was 97 percent. And they both had sensitivity and specificity rates ranging from 95 to 100 percent—which means that there were very few false negatives or false positives from either dog.To add to all this, the dogs were able to detect low-risk and advanced prostate cancers with equal skill.

Needless to say, I think this is all absolutely fascinating.

These results are way better than any blood test out there. This method of screening doesn’t require any invasive procedure, and it’s certainly cheaper. (Which is why we likely won’t be seeing more trained dogs anytime soon. After all, our health care system just loves to spend money—your money, that is.)

And it’s not just prostate cancer patients who could benefit from this new “technology.” Other studies report that dogs can use their sense of smell to identify lung and breast cancer using only breath samples. And that they can sniff out colon cancer in stool, too.

Of course, we still don’t really know how the dogs are able to do this. What are they actually smelling? It must be something specific to deliver such high accuracy… but what?

Scientists haven’t found the answer to that question yet. So I’m left to wonder how they even trained dogs to do this in the first place. (Though admittedly, these weren’t just any ordinary dogs—they had also been trained to detect explosives.)

Ultimately, identifying the compounds responsible for this phenomenon could crack open a whole world of new possibilities. Like electronic “noses” designed to sniff out cancer—similar to devices the military already uses to detect chemical weapons.

In fact, one such device does exist. It’s called the ChemPro 100 eNose. It’s made by a company called Environics. And a recent pilot study showed that it could also pinpoint prostate cancer from a urine sample. Its accuracy rate neared 80 percent.

Impressive, but not nearly as good as the dogs. With results like theirs, who needs a PSA test?

But this research is pretty mind-blowing. And I can’t wait to see where it leads.

Dogs are such beautiful and amazing creatures—truly man’s best friend. There are a million reasons to go adopt one today. This latest discovery is just one of the more extraordinary ones.