I just read a new study that I found really fascinating. It used a high-tech approach to support weight loss. Although I guess that’s really not too surprising, considering technology is completely integrated into our lives today. We rely computers, tablets, smartphones and apps for nearly everything we do (including keeping our kids occupied).

But this study out of the UK used technology in a unique way that got to the heart of ever-vexing problem of sustaining weight loss. 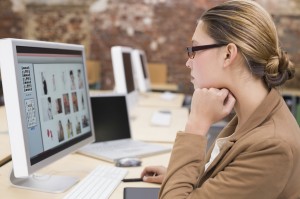 Researchers from the University of Exeter and Cardiff University developed a computer game that helps to re-train your brain to not to crave unhealthy foods.

It was sort of like the “Pavlov’s dog” experiment in reverse.

It started with one basic observation: That seeing food automatically sends a signal to your brain that says “EAT.” In fact, humans are “hard-wired” to start salivating just by looking at food.

These automatic responses are as strong as they are fast — making them hard to control. If you’ve ever gone grocery shopping while hungry, you know what I’m talking about. You come home with all sorts of things that you normally wouldn’t have grabbed.

Knowing how this sight/food connection works, the UK researchers wanted to find out if these automatic responses could be “unlearned.” So they developed a computer program featuring a technique called “response-inhibition training.”

They recruited 41 middle-aged people. The majority of participants — 78% of them — were overweight or obese, but there were also a few people who were in the normal BMI range who had poor self-control when it came to snacking on junk food like chips, cookies, and cake.

Over a two-week period, half the participants played four 10-minute sessions of an online game that used visual representations of certain healthy and unhealthy foods. For instance, a picture of a slice of pizza was in the “unhealthy” group, and a bowl of salad greens was in the “healthy” category.

The active group was trained to repeatedly avoid selecting images of unhealthy foods when they appeared on the screen. Instead, they were encouraged to click on photos of healthy foods. The control group had the same training, but their photos involved non-food items such as pencils and pens.

The researchers reported that participants consumed around 220 fewer calories per day and lost an average of 670g over the course of the study. (That’s 1.5 pounds to you and me.)

After the study concluded, the volunteers kept food diaries for six months and recorded what they ate. And believe it or not, the participants maintained — and even improved –their new eating habits.

In essence, the researchers tried to reprogram the brain by targeting motor responses to food. And it worked! It’s like science fiction brought to life.

With a technique like this, you almost take self-control out of the equation — something many people (especially those struggling with obesity) tend to lack on a consistent basis. I’m all for any sort of approach that can help people manage cravings and eat healthy. Because you know as well as I do how hard it can be to maintain self-control over food all the time.

Unfortunately, studies like these are still in their infancy. So we know all too little about the capacity of the brain. But if programs like this can tackle the problem of obesity at its source, they’re well worth pursuing. Especially since cognitive training like this is inexpensive and easy to do.

It’s going to be amazing what we figure out in the next century.