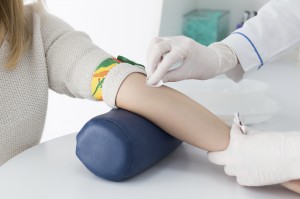 If you’re anything like a lot of my patients, just the thought of a having a colonoscopy makes you squeamish. As I’ve mentioned many times, colonoscopies aren’t optional for me because of my very strong family history of colon cancer. But if your genetics aren’t working against you, there’s good news on the horizon. A simple blood test may save you from undergoing this invasive procedure in the future.

Back in July, a team of researchers from Luxembourg presented their findings at the 17th World Congress on Gastrointestinal Cancer in Barcelona. This study compared 185 people who had colon cancer to 93 who did not, and from this comparison they were able to identify 8 specific genetic biomarkers (TGFBR1, GSTT1, INSR, telRNA, LRRC1, GSTM1, CHR8, and FOXO1) that put people at maximum risk for colon cancer.

As the researchers increased the number of genetic variations they looked for in the screening, they were better able to define higher and lower risk profiles. Then, depending on the risk profile, they were able to recommend whether a follow up colonoscopy was required. And although the cost of the test would depend on the specific biomarkers chosen to be tested, as well as the number of biomarkers, the price tag would most likely be between $50 to $100 per patient, which is far less than the cost of a colonoscopy…not to mention a lot more comfortable.

The beauty of a test like this is it can be done from a standard blood test a person gets in any doctor’s office, lab, or clinic. Seems like a great way to save millions of dollars of unnecessary screening and to allay patient fears. So, I say hats off to the researchers who are finding simpler, less expensive ways to predict life-threatening diseases through genetics. If, after more trials, this test were to prove itself valuable, it would not only identify those who didn’t need a colonoscopy but more importantly, identify those who do. And if they know their risk level, perhaps those individuals would be less reluctant to undergo the procedure.

But, until then, I still encourage those with a strong family history to get a colonoscopy. And if you don’t have a family history, there are other non-invasive screening options that are available now. Like the fecal immunochemical test (FIT). This is a simple stool test you can perform at home. It doesn’t require any uncomfortable or harsh preparations. And a recent meta-analysis of 19 different studies showed that FIT is both highly sensitive and specific. Which means FIT isn’t just able to detect colon cancer–it’s able to do so with impressive accuracy.

Results showed that FIT was able to detect four out of five cancers after just a single test. You may also want to consider another test, called ColoVantange. ColoVantage is a blood test that’s available through Quest Diagnostics. And it screens for colon cancer based on genetic markers (in this case, the SEPT9 gene). It’s able to detect cancer about 70 percent of the time. And in most cases the result is accurate. Of course, all that said, there are no assurances that many of these tests are as effective as colonoscopy. But if it comes down to alternative testing or no testing at all, I’d much rather see you agreeing to the former.

Because sadly, I know firsthand how heavily your life could depend upon it. Colon cancer is a silent killer. Don’t let it sneak up on you. P.S. Regular screening isn’t the only thing you can do to keep your risk of cancer in check. In fact, I’ve compiled a comprehensive, detailed guide on the best ways to armor yourself against this deadly disease. And, believe it or not, the best protection starts right in the supermarket. To learn more, click HERE.