Now here’s an article I never thought I would see published by the mainstream medical media in my lifetime. But according to a recent large-scale clinical trial, treating high blood pressure too aggressively with drugs may be just as 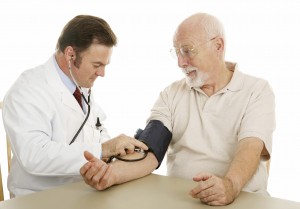 dangerous as not treating it at all.

Researchers looked at data from a large, diverse population of patients being treated for hypertension. They found that subjects whose blood-pressure (BP) levels were above or below an “optimal” range were more likely to die or develop end-stage renal disease (ESRD) during a three- to five-year follow-up.

This type of finding resembles a U-shape curve — meaning those who were too well controlled, and those whose blood pressure was controlled poorly, did worse than those whose BP was just right. And the definition of “just right” may surprise you.

The researchers found that the ideal ranges for blood pressure were actually different than the current blood pressure guidelines the “experts” have been recommending for years. The American Heart Association recommends 120/80 as the target for healthy blood pressure. But according to this new research, patients with systolic blood pressure (the upper number), between 130 and 139 had the lowest risk for death. And the corresponding diastolic pressure (the bottom number) was ideal between 60 and 79. For folks age 70 or older, the ideal BP reading appeared to be 140/70.

And the researchers also found that forcing a patient’s BP lower than this newly established “ideal” with pharmaceutical drugs was actually harmful. That’s a shocking allegation coming from the powers that be — but I couldn’t be happier.

And get this, the researchers (who I imagine are now being fired as we speak and will never get another grant as long as they live) concluded that “the potential dangers of over-treatment may need to be considered.”

I guess these folks are going to have to come work with me now.

Current mainstream hypertension treatment guidelines assume that as BP increases, the risk of death (and other complications) increases in a linear fashion. But this study turns that notion on its head.

Of course, guess who came up with those guidelines in the first place? That’s right: big pharma (i.e., our good friends behind “evidence-based” medicine — and the ones who churn out all those blood pressure drugs).

Actually, this same paradigm occurs in diabetes control. It is a little-publicized fact that if you have diabetes, it’s safer and healthier to keep your HgBA1C around 7. A couple of years ago a large clinical trial found that pushing it lower with medication actually increases overall mortality risk.  I wonder how many endocrinologists know this (or, worse yet, know it but never tell their patients, because doing so will cut into their profits).

So, for the record (and you can show this to your physician at your next visit): hypertension is considered well controlled when it is less than or equal to 140/90. And, what’s more, that number increases the older you get. (In fact, one group is even calling for that ideal number to be 150/90 if you’re 60 years or older.)

Talk about rocking the boat.  I fear the Pfizer building (which my office is ironically next to) is quivering in its concrete boots.

Headlines about exercise only tell part of the story

Sometimes the media makes a valid (if obvious) point, but in an unnecessarily alarmist way. I read one such article recently, titled “Contrary to popular belief, more exercise isn’t always better.”

Well, that statement is certainly true…it’s not better in every case. But it is better in most cases. Which is why it was so frustrating to see this headline–knowing that most people will never bother to read the “fine print” buried beneath it: that there’s an increase in cardiovascular deaths in heart attack survivors who exercise to excess. (In other words the headline should have been: “For heart attack survivors, more exercise isn’t always better”.)

The article went on to specify that the “highest levels of exercise” were deemed unsafe and risky. But in people who ran under 30 miles or walked less than 46 miles a week, there was a significant reduction in death risk. (Um, how many recent heart attack survivors are running more than 30 miles a week?)

But I find it infuriating when articles (like this one) that actually suggest exercising in moderation are couched with misleading “exercise can kill you” headlines and generalizations. The study this latest article was referring to only applies to an extremely specific population–heart attack survivors who are routinely engaging in extreme exercise.

Bottom line: Never use research like this as an excuse not to get moving. Of course, if you’ve had a heart attack (or even if you haven’t) you may not want to scale a mountain or start training for a triathlon. But there’s absolutely no reason why you shouldn’t, at minimum, be going for a brisk walk every single day.

“Impact of Achieved Blood Pressures on Mortality Risk and End-Stage Renal Disease Among a Large, Diverse Hypertension Population,” Journal of the American College of Cardiology 2014;