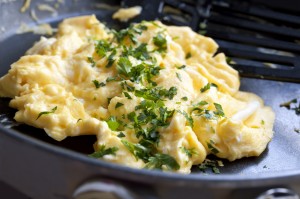 I’ve been saying this for years. But now a new study confirms that eggs do not—I repeat, do not—have an adverse effect on the heart. Even in patients with diabetes, who are already at increased risk of cardiovascular disease. Did everyone hear that? (How about you, American Heart Association? Hello, USDA…you listening?)

In fact, the researchers also found that following an egg-rich diet for three months offered some significant benefits in patients with Type 2 diabetes. Better appetite control, for one. Of course, this discovery may get the “duh” award of the week—and it’s only Monday.

Eggs help with appetite control because they’re packed with protein. And eating protein—rather than bagels, donuts, and the other simple carbs most Americans eat for breakfast—naturally makes you feel more full for much longer.

And guess what? There were no differences between the two groups with respect to LDL (bad) cholesterol levels, triglycerides, or glycemic control.

The researchers also made the point that numerous other studies have indicated that high egg consumption isn’t associated with adverse cardiovascular outcomes in the general population.

Which makes the national guidelines on egg consumption and total dietary cholesterol intake all the more maddening.

Current guidelines (set by the U.S. Heart Association) recommend no more than four eggs a week. Why? Because they believe dietary cholesterol should be limited to less than 300 mg/day. And a single egg has approximately 200 mg of cholesterol.

But this new study (not to mention dozens of others that came before it) proves that eating a dozen eggs per week—three times the “recommended” number—WON’T negatively impact your cholesterol or triglyceride levels.

If the government wants to do something healthy for us, they should stop worrying so much about fat and cholesterol, and start focusing on the REAL enemy hiding in our food supply—sugar.

So I’ll finish up by telling you the same thing I tell my patients who have been brainwashed into egg-phobia: Eggs are one of Nature’s most perfect foods. Eat as many as you like. Just make sure they come from free-range hens. You can find free-range eggs in most supermarkets these days. So, really, there’s no excuse not to eat one of the world’s most perfect foods… in its most perfect form.