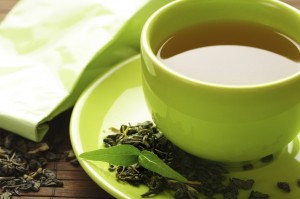 I don’t know a single person who’s not terrified of losing their memory.

I’m not just talking about Alzheimer’s disease, either. Even harmless “senior moments” can snowball into a serious problem. And with people living longer than ever, that’s exactly what’s happening these days. Cognitive decline is sucking the quality right out of those extra years at a staggering rate, right alongside chronic diseases like diabetes.

Luckily, you have a say in what happens to your brain. Starting with what you drink.

That’s right—if you thought green tea couldn’t get any healthier for you…well, it just did.

This new study was small—just a dozen volunteers. Researchers gave one half a drink containing green tea extract, and gave the other half the same drink without green tea. Then they gave all the subjects memory-related tasks to complete—while at the same time, examining brain activity through an MRI.

The imaging showed that subjects who took the green tea extract had better connections between the different cortexes of their brains. And that this increased connectivity significantly improved memory performance.

In other words, these researchers found that green tea helps the different parts of your brain to communicate better. And this helps your mind work as a more efficient computer.

It’s amazing news for anyone who’s concerned about dementia. And remember, this condition strikes in many different forms—some of which are a lot more common than you might think.

Older women in particular often end up plagued with memory loss during menopause. And if something as simple as green tea extract can help in this situation—which, in my experience (as a doctor treating these women, not having gone through menopause myself, obviously) is one of the more difficult changes that occur—then that’s an incredible benefit by itself.

But it’s not the only one. As I explained last year, laboratory research suggests that green tea may be able to break up the beta amyloid plaques implicated in Alzheimer’s disease. (It’s not human data—but these latest results certainly give the findings more weight.)

Not to mention green tea’s laundry list of other incredible benefits—from blood sugar control, to cancer prevention  to lower blood pressure and cholesterol.

That said, you would have to drink a lot of green tea to get enough of the specific extract associated with these benefits (called epigallocatechin gallate, or EGCG). So I recommend taking it in supplement form.

Green tea supplements are widely available and generally affordable. The bad news is they’re not all created equal—so you have to keep an eye out for quality.

Look for a standardized product. One that contains 95 percent polyphenols is ideal. (You don’t want to bother with a product that’s standardized to less than 50 percent.)

Also be sure to check out the catechin and EGCG content. The best products will contain 60 percent catechins, and 30 percent EGCG.

Once you find a product that meets these standards, I usually recommend around 500 mg daily. But taking a supplement doesn’t mean you can’t still enjoy green tea’s incredible benefits in beverage form. Just do what I do and brew up a cup or two of loose-leaf green tea every day.